Job losses from this recession are staggering. calculated risk has a nice visualization of the magnitude of man hours lost 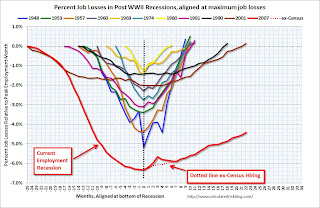 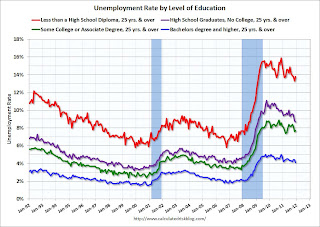 Even under optimistic scenarios (which we are not currently experiencing), it will take 5 to 10 years to get these jobs back. If they ever come back.

This means a lot of people without work and income. The question then is: what should we do about this? Should we do anything?

One option is to give everyone a basic income. The basic income guarantee is an “unconditional, government-insured guarantee that all citizens will have enough income to meet their basic needs.” It differs specifically from a negative income tax, like our current social programs, in that every individual (not household) receives the benefit, regardless of wealth or income, unconditionally.

Why would this work? There are a bunch of reasons, which I’ll get into, but more pressing is the one big reason why people think it won’t work: people will lose the motivation to work. I think this belief represents a misunderstanding of human motivation. People work harder — go to college, put in the hours — because of innate desires for status and social approval, not out of terror of meeting their basic needs. In fact, under pressure of homelessness or starvation, people will often be forced to make sub-optimal long-term decisions, like foregoing investment (schooling) in themselves or their children.

Anyways, here are the pros and cons as I see them, and my rebuttals.

Reduced incentive to work
I addressed this above, but there is hard evidence on this. Manitoba, Canada, actually tried a basic income program for 5 years, known as Mincome. The results:

On the whole, the research results were encouraging to those who favour a GAI [Guaranteed Annual Income]. The reduction in work effort was modest: about one per cent for men, three per cent for wives, and five per cent for unmarried women. These are small effects in absolute terms.

Smaller and shorter-term studies in the US have found slightly larger effects, around 5% total drop in employment. I think this is a real draw back. It’s easy to see how demand for certain low-paying jobs would decrease, raising prices and reducing output for those goods below an optimal level. The good part about basic income is that its distortion of incentives is very simple and fairly predictable, unlike most federal social programs that target specific actions or demographics and create myriad twisted incentives and unintended consequences.

Redistribution
You may or may not see this as a con, but in the end a basic income is a redistribution of wealth from the rich to the poor. (Yes the “rich” get the income too but they are paying for their own in taxes as well as the poor’s.) You can make a moral argument against redistribution, but I think it is a weak one. Luck plays an enormous role in any one person’s outcome. To the extent we can smooth out luck, I think we should. A basic income guarantee seems like a reasonable step in the right direction.

Inflation
Some people argue a basic income would simply raise prices. Again, this money is not just printed, it comes from a (presumably progressive) tax, so any affect on the money supply would come from marginal consumption differences at high and low income levels, which do exist empirically, but the effect would be small and predictable (i.e. preventable).

Political hazard
It would be hard politically to ever reduce the basic income, and very politically profitable to increase it. This would quickly result in another runaway social program (we have enough of those already). I think this is very easily solved by tying the basic income amount to hard economic and government indicators (inflation, gdp, debt ratio) in a way that guarantees both the solvency of the state and utility of the income. The rate setting could never be something that was easily changed by politicians.

Simplification
I am a HUGE proponent of simplified (not smaller) government. Currently we have

All of these could be replaced by a dead simple basic income program: cut everyone over 18 with a social security number a check. The opportunities for the government to screw it up are minimal; the bureaucracy would be tiny.
Increased education

Research on the Mincome program found significant increases in education.

Reduced poverty, homelessness
This is of course the big benefit. The negative externalities of poverty are large (cite, cite). Reducing it benefits everyone. Even if you are rich, have no feelings of empathy for the poor, and only want the best for yourself (in short you are an asshole), I still think it is in your best interest, economically and politically, to keep poverty low.

I was prompted to write about this by my growing belief that human labor, as a factor of production, will eventually and inevitably be priced out of most of the economy. Machines have been and will continue to produce more and more of our goods without our input. This is anawesome thing, and it doesn’t mean humans won’t find other productive work to fill their time, it just means as a proportion of our total output, our contribution will be continually less significant. This means a lot of surplus value, value that could be productively put towards a basic income instead of, say, capitalists’ (bulging) pockets.